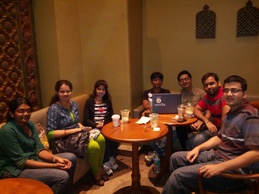 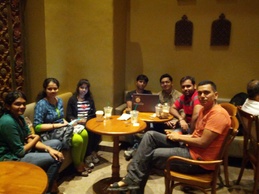 Anushree Salunkhe installed Ubuntu 13.04 (alongside Windows) on her Compaq Presario B1200 and the install was a breeze. The wi-fi card on her laptop did not work out-of-the-box. It seems that the network card drivers were not available. Nothing that a quick update (using Ethernet) could not fix. Next up was Dhanashri. She installed Ubuntu 13.04 on her Dell Inspririon N5050. She even installed updates during the installation, using the free wi-fi generously provided by Starbucks.

Finally, we tried to install Ubuntu 13.04 on Purvesh Shah‘s flash-drive. This was not a success. Even though it seemed that the installation had completed without any issues, the flash-drive would not boot up. Don’t know why this happened and we did not have enough time to diagnose the issue.

I had brought my Nexus 7 as well. I showed everyone Ubuntu Touch 13.04 running on the device.

The evening soon moved into some lively conversation with everyone talking about some of their experiences using Ubuntu and Free Software in general.

So, until next time Mumbai! (Psst: Next time might be sooner than expected…)